100 years since the death of Dr A.T. Still, the founder of Osteopathy 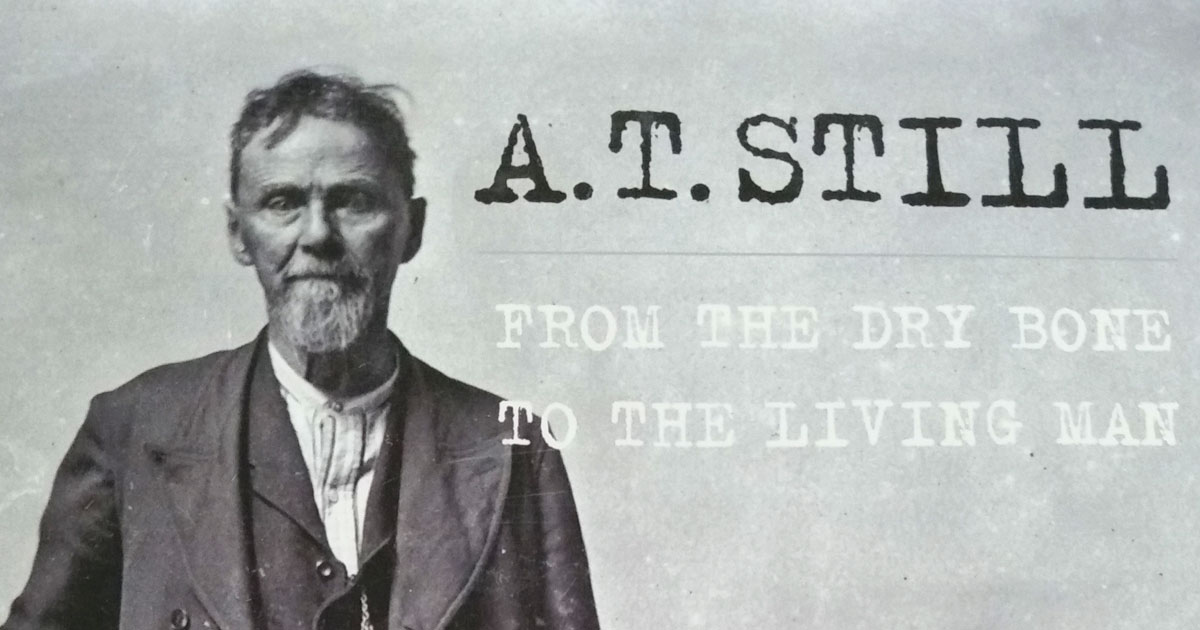 100 years since the death of Dr A.T. Still, the founder of Osteopathy

Today marks the 100th anniversary of the death of Dr Andrew Taylor Still MD, the founder of Osteopathy.

It seems fitting to reflect on his life and times.

We would like to acknowledge his great contribution to advancing our knowledge about human machinery and providing a means to relieve peoples suffering and helping them to live healthier lives.

Dr Still was born in Virginia, USA in 1828, and spent most of his formative years in Kansas. He fought against slavery in the American civil war. He spent many years practising standard medicine but increasingly prescribed less and less medication given its poor results.

He became further disillusioned when three of his children died from meningitis… “believing there must be a better way to heal the sick than introducing toxic substances into the body, he embarked on a lifelong quest to decipher the riddles of health and disease, life and death.”

He became convinced that the body was designed to heal itself. This was quite a revolutionary thought at the time. He reasoned that restoring normal movement was crucial to supporting the body’s immune system, …”any mechanical disorder, however small, could be a potent cause of disease.”

After 20 years of scientific investigation, in 1874 he proposed and developed a system of healing called Osteopathy. It’s hard to believe and even imagine that kind of dedication to helping others.

In the following 15 years he was ostracised by his medical colleagues, patients, family and friends until he eventually won them over by the sheer force of his results. They really didn’t want to hear it but the results were simply too compelling to ignore. Dr Still indeed challenged the medical establishment of the time… “the man who saw the truth who had the mind to conceive it , the indomitable will and courage to put it over in the face of bitter opposition, poverty and social ostracism, and abiding faith in it’s ultimate triumph.”

In 1892 Dr Still set up the American School of Osteopathy in Kirksville, Missouri. Eventually, Osteopathy became a parallel system alongside medicine throughout the United States.

Osteopathy is about co-operating with the body and with its natural processes; recognising that the body is self-regulating and self-healing. By identifying and correcting areas of restricted motion, the osteopath may improve balance in the structures so that the body can function better.

One of the hallmarks for Osteopathy has been Dr Still’s holistic approach, searching for the cause and not just addressing the symptoms. To Dr Still, understanding Osteopathy was to appreciate and know the minute detail of the body’s anatomy and physiology so as to truly comprehend disease and health. “…it is never a question as to what the remedy or the treatment will do to the body but what the body will do with the remedy or treatment.”

Thanks to Dr Still’s years of dedication to developing a unique form of healthcare, I have been able to pursue a career in Osteopathy, which has given me much satisfaction and joy in being able to help and assist many people.

It has been my privilege to have been taught by others who have in turn been taught by those who learnt directly from Dr Still. Osteopathy is not something you can learn just in a book but is passed on hand to hand and by listening to our patients’ bodies with an open mind. Still never stopped studying and urged all osteopaths to ‘dig on’ and I have found that to be just as necessary in my own experience as my journey as an osteopath continues.

*I would also like to acknowledge and thank author John Lewis who wrote the book about AT Still – “From the Dry Bone to the Living Man”– from which I have included italicised quotations above. A must read for all osteopaths!